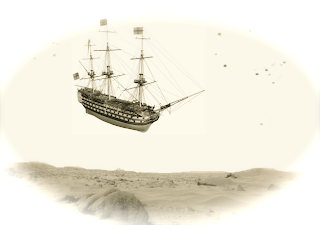 For any Science Fiction game it is necessary to have some scientific MacGuffin on which to hang our hat, especially for SF games set in the past. In 1812: Napoleon on Mars it is an amalgam of Newton's laws of universal gravitation and motion leading to the discovery of the force of anti-gravity.

Once harnessed by the Montgolfier brothers in their Aerograv Réveillon military applications became obvious in a world already beset by global war leading to flying man'o'war and the exploration of the Moon and nearby planets with aerograv. Of course this does introduce opportunities for battles between flying sail ships and I suspect that is one avenue of many we will explore as we develop the background and game.

On Mars itself, as I have already touched on, the atmosphere has very little oxygen necessitating human troops to wear re-breathing apparatus to breath and clockwork primers on muskets to generate a small electric spark to ignite the priming powder. The Martians themselves use indigenous weaponry in the form of electro-muskets and cannon, but these are unable to hold sufficient charge for a long period which will result in the need to keep Martian units replenished in the game in a way that Human ones won't.

There is of course some tactical battlefield application of anti-gravity but I intend to explore the idea of aerial vessels and their impact on ground battles at a later stage, 1812 itself will focus strictly on land battles between the British, French and their Martian allies and enemies.
Posted by Steve at 2:19 pm 5 comments:

Email ThisBlogThis!Share to TwitterShare to FacebookShare to Pinterest
Labels: Background 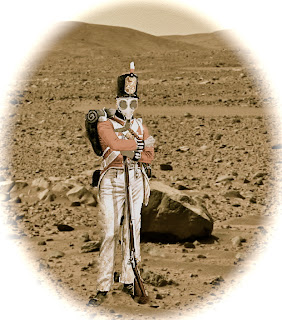 As you can probably guess commissioning miniatures and then having master and production moulds made can be an extremely costly business, the financial risk being all the greater if the miniatures are for something as 'unusual' as 1812: Napoleon on Mars (no matter how cool I think the concept is!).

On top of the cost to Wessex Games there is also the cost to you the gamer. The game is a 'typical' Napoleonic brigade sized one so you will need over one hundred infantry and cavalry a side, plus artillery. In white metal that is a not inconsiderable outlay, especially in 28mm.

Clearly the solution is plastics with 28mm plastic Napoleonic infantry cost 1/3 of their white metal equivalent but until I win the lottery that is not something Wessex Games can think about.

However it occurred to me that we could make white metal conversion pieces for other companies plastic Napoleonic miniatures, namely the mask attached to the backpack re-breather convertor unit by a hose. Victrix and Perry's already make historical variant heads for their plastic miniatures so the concept is already tried and tested. The only potential issue is whether one conversion set will be useable on all manufacturers plastics or whether we will need to do, for example, a French Infantry conversion pack for each of Perry, Victrix and Warlord, all of whom do 28mm plastic French infantry (and who are we to dictate you must use one company over another, you may like the multi-part nature of Victrix of the simple three piece approach of Warlord).

Cavalry are a little more problematical as in the background horses are unable to draw enough oxygen out of the atmosphere through their rebreather units to fulfil their battlefield roles and cavalry are mounted on local fauna (of a currently nebulous Barsoomian inspired type). This will probably necessitate us releasing a suitable metal mount for plastic cavalry to be mounted on but as you will probably only need one regiment this won't be prohibitively expensive.

The only remaining issue will be the Martian sepoys and city-state troops, I'd like them to have an exotic look but somehow retain the cost effectiveness of the plastic/white metal hybrid approach of human troops. Logic dictates looking at the various new sets of plastic Ancients and seeming how easy it would be to produce suitable conversion bits for some of them.

What about 15mm I hear some of you cry? Well yes the rules are designed as much with 15mm in mind as 28mm. My initial feeling regarding miniatures is that given the size it will probably be easy enough to convert white metal figures with some Green Stuff or Liquid Green Stuff to portray the masks and paint backpacks appropriately (to protect them from Martian dust they will have oilskin covers similar to those used on shakoes). I will experiment on finding a simple solution here and the solutions for both 15 and 28mm will be fully detailed with stage by stage photographs in the rule book.

Of course you could just follow the observations of British astronomer William Herschel who said "Mars has a considerable but modest atmosphere, so that its inhabitants probably enjoy a situation in many respects similar to our own", in which case you can just buy your Napoleonic soldiers off the shelf and not worry about converting any... :-)
Posted by Steve at 5:02 pm 5 comments:

Email ThisBlogThis!Share to TwitterShare to FacebookShare to Pinterest
Labels: Miniatures 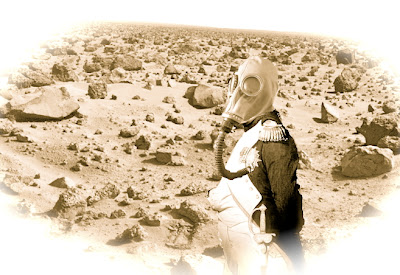 1812: Napoleon on Mars is a wargames project I've been tinkering with behind the scenes at Wessex Games for a couple of years, doing odd bits of world building and rules writing as and when.

The basic concept is simple enough, instead of invading Russia in 1812, the Emperor decides to invade Mars...

How does he get there?

Simple, an aerograv powered by a Newtonian anti-gravity device (which obviously you get by combining Newton's law of universal gravitation with his laws of motion).

What is there when he gets there?

Aside from a dying civilisation of Martian city-states on an arid water starved world? Well the British of course. Perfidious Albion is developing trading links with the Martians thwarting Napoleon's Continental System economic blockade.

Basically the idea is to take inspiration from the battles between the British and French in India and Egypt and transfer them to a Barsoom-like Mars and have fun doing so. The battles will be normally be standard Napoleonic level brigade-level type games, but have something of a colonial (even VSF - or should that be GSF?) vibe.

The basic rules will just feature the French and the British, along with their Martian sepoys. I have ideas to extend the game beyond this by introducing other nations such as Austria, Prussia, Russia and even the United States as they join in the war on Mars but wanted to start simple and build up from there. A resurrected Society of United Irishmen may also feature...

Over the next few posts I'll talk more about the background, miniatures and rules so please join the Grognards below by following the blog and hopefully we'll all have some fun taking the Corsican Tyrant and Iron Duke to the Red Planet...
Posted by Steve at 3:00 pm 7 comments:

The War of the Worlds

1812: The Great French War had raged across the world for twenty years. Much of Europe was under the domination of The Corsican Tyrant, only the "fortress built by nature herself", Great Britain, stands alone against the mighty French Empire.
Whilst still fighting battles on the Iberian peninsula against the intractable British, it seemed that Napoleon's Grande Armée would soon march on Russia, however Napoleon had a different conquest in mind and so he drew his plans to conquer Mars...